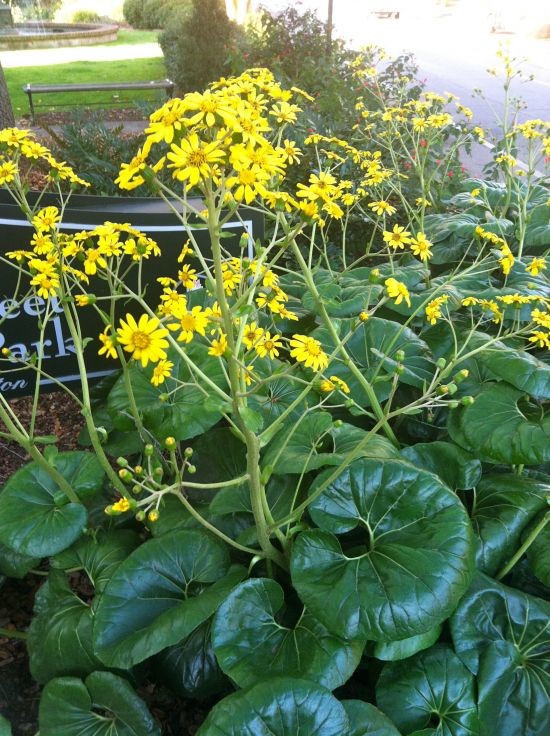 Giant Leopard Plant (Farfugium japonicum ‘Gigantea’) is a beautiful shade garden species that adds unique foliage and color to the understory of your tropical garden.

This herbaceous perennial is characterized by its broad, rounded, shiny leaves that are 5-18 inches across and rise up from the ground on 3-4 ft stalks. This plant prefers part to full shade and is known for its yellow daisy-like flowers that branch on long stalks in the late summer.

Farfugium is also cold hardy up to zone 7 making it a good choice for all areas of Florida. This plant does best in organic-rich soil, with medium moisture content. This spreading perennial grows in clumps and can be divided to pass along to friends and fellow gardeners.

The Giant Leopard Plant is native to the streams, meadows, and coastal areas of Japan and eastern Asia. This plant has a unique naming history as it was originally named by famed botanist Carl Linnaeus (1707-1778) who named it Tusssilago japonica thinking it was the Asian relative of the European coltsfoot that looks very similar. Roman naturalist and natural philosopher Pliny the Elder coined the farfugium as the name for coltsfoot back in the 1st century. It was rediscovered in the 1800s given the name Ligularia tussilaginea but it was not until 1939 the Botanical Institute at Kyoto University properly described the plant as Farfugium japonicum.