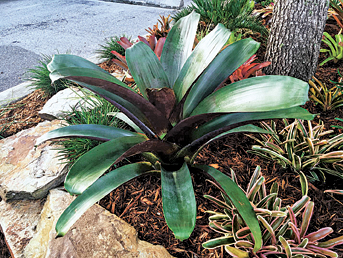 The bromeliad plant is a family of monocot flowering plants with around 3475 known species. The bromeliad is found through the subtropics of America, West Africa, and throughout South America. In the United States they are found in Virginia, Florida, Texas and Arizona. This plant is uniquely adapted to withstand a wide variety of climates due to its unique ability to accumulate water between its succulent leaves while at the same time providing aquatic habitats for a wide array of invertebrates. This in turn nourishes the plant with organic material for the plant to thrive.

The bromeliad is found in areas where humidity is high, and can thrive in conditions from full shade to full sun. The species of bromeliad that does best in the Florida climate are the sun varieties that include bromeliad imperials (alcantarea imperialis) and bromeliad pert (Neoregelia Petra). The alcantarea imperials is considered the signature species among the 20 or so in the vriesea genus. This variety is characterized by its large form with the ability to grow to a massive 5 feet across with a flower spike that can reach over six feet tall, although this could take 10 years or longer to achieve that impressive size. Originating in Brazil, this species has leaves with a blueish-green top and a maroon bottom, giving it a beautiful contrast of colors. The imperials takes 3 to 10 years to bloom a beautiful spike of small white flowers numbering in the hundreds, making this one of the most striking bromeliads in the tropical landscape and was popularized by Robert Burle-Marx, the famous Brazilian landscape architect.

The petra variety of bromeliad is a smaller variety compared to the imperials and is characterized by deep bright reds and oranges. This variety of sun bromeliad thrives in full sun. Described as tough by many bromeliad growers, it has the ability to handle a few frosts. Petra’s bright leaves increase in intensity with direct sun exposure. This variety also makes a great groundcover due to its ability to create offshoots on its stolons, making it easy to create a mass planting of gorgeous color. Adding groups of petra bromeliads will add intense bright colors to any native plant garden on Sanibel.

This column is a joint effort by all at In The Garden, Sanibel’s local garden center, located at 3889 Sanibel Captiva Road.