In The Garden – Papaya Tree 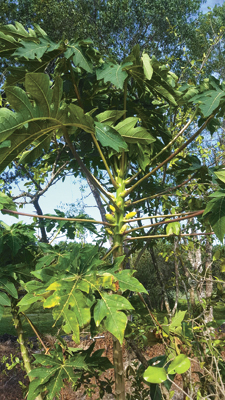 Spring is the time for this luscious fruit. The papaya tree is an exotic fruiting specimen that grows best in USDA zones 9 and 10. Native to Central America, this tropical plant thrives in subtropical areas of the Caribbean and throughout South Florida. This plant belongs to the Caricacae family that includes 27 to 30 species. The papaya can reach up to 30 feet in height and are characterized by palmate leaves that are deeply lobed.

In the 16th and 17th centuries, papaya became very popular with Spanish and Portuguese explorers and they quickly began transporting seeds throughout the Caribbean, Pacific Islands, and all the way to Southeast Asia in the 16th century. The ability of the papaya seed to remain viable for many years after drying even allowed this plant to reach the lands of Malacca and India as well.

This plant can be monoecious which means having both male and female flowers. Some plants during certain seasons may change sex during high temperatures during the hot Southwest Florida summers. Once pollinated, the fruit the papaya bears is characterized by its melon like shape that is elongated and club shaped, and can weigh up to 20 pounds when ripe.

The uses for the fruit are plentiful. The fruit of the papaya becomes aromatic, and inside can range from yellow and orange to various shades of red. The flavor can be described as sweet, and similar in flavor to cantaloupe. The fruit is often cubed or shaped into balls and served in fruit salads and fruit cups. It can also be made into sauce for shortcake and ice creams as well as being cooked in pies, pickled or preserved as jam. Papaya juice is another very popular method of consuming this fruit. In the East Indies, the young leaves are boiled, and eaten for their high nutritional value. Overall, papaya is a fair source of iron and calcium. It is also a good source of vitamins A, B, G and an excellent source of vitamin C.

This column is a joint effort by all at In The Garden, Sanibel’s local garden center located at 3889 Sanibel Captiva Road Sanibel Island, Florida.